When I purchased my home, I had to have a water feature. It’s just a must for me. Something that brings visual tranquility. For me, and based on my previous home, I knew a swimming pool of crisp rippling hues of blue would do just that. But one problem was: justification. I couldn’t justify the expense given I don’t really swim, or the affordability in and of itself. I then looked at in-ground hot tubs. But I knew I wouldn’t use them much either. I then gave consideration to fish ponds, reflecting ponds, streams, fountain structures and anything else containing water. After perusing the internet extensively, I knew I needed blue water …and a fish pond was born. The biggest part of this project was undoubtedly the hand shoveling, and beyond that, just the research into how to create it.

So, digging ceased until spring. Spring digging was mainly focused on final shaping of the pond. When it came to liners, there appeared to be two primary types suggested for large long-lasting ponds: PVC or EPDM. Where I heard great things about EPDM, my desire for “blue” dictated I use PVC. I did try really hard to envision myself mixing a concrete basin with Pond Armor Pond Paint for my blue hue brew, but that would have resulted in a pond too tiny for me to even see because at age 55, I just didn’t have the spark or skill for more. Research also informed me I would need a pond fabric underlayment, and I bought the Firestone pond underlayment as it appeared vitally important to pond liner protection from roots.

The liner was placed back in the basin, water was hosed into it, and I found that my leveling of the pond from one end to the other with a string and some sticks wasn’t half bad! Rocks, too, were a time consuming part of this project. They are what hold the liner edges down. My biggest hurdle with this was, that in the hundreds of images of ponds I looked at, I arrived at the conclusion that rocks of the same type all placed symmetrically around a pond was not for me. I knew I needed all shapes and sizes and I knew they needed to be random in placement for a more natural setting. What I didn’t know is how hard or expensive this part could be. Rocks ain’t cheap! So, I waited patiently for the giveaways on Facebook’s Marketplace, and I drove a 100 miles to get them if that’s what it took. I built the small deck, my first, based on internet images and instructions. It not only gives fish a place to hide from prey, but also gives some hints of mystery to the pond feature in my view. It’s also great night-time retreat with a glass of wine. 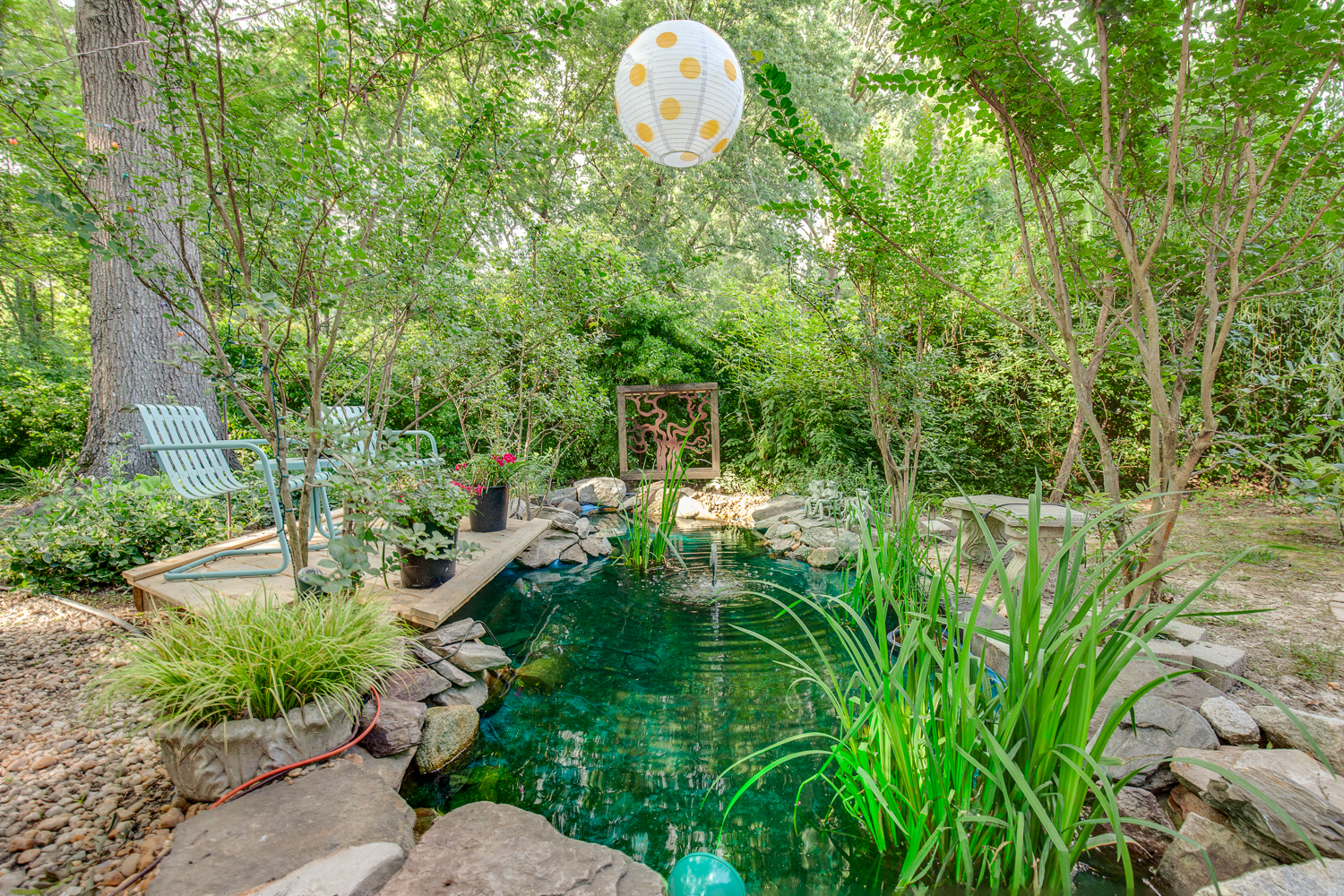 In the end, I found that dirt does get in the pond from the rock installation and that some silt accumulates in particular areas. Nevertheless, it still looks lovely and some rocks in the basin placed randomly about, along with appropriate pond cleaning, keep it blue-thru! Ask me if this is the case in a year. I’d like to be able to tell you. But personal circumstances caused me to sell my home just upon pond completion…and now I own a condo … with no yard!

Sign Up
Already a User? Sign In
You have been successfully registered
Please check your email.
Go to the homepage
Sorry something went wrong
Please try again.
Try again